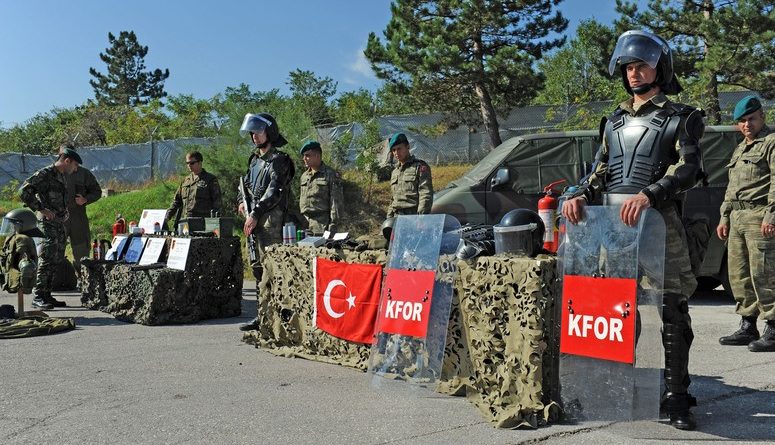 Turkish presence and influence across Western Balkans is not only historically rooted but also currently widely discussed. The engagement of Turkey might be observed through all importatnt fields of the region including politics, economic and trade  ties, diplomacy, education, humanitarian aid, support to the muslim community, cultural impact,  infrastructure and energy field investments and neverheless military and security involvement.

On december 2018  Turkey stated that it will support Kosovo´s effort to transform its security force into an official army that is supposed to consist  from more than 5000 members. Turkey referred to the tranformation as to a „sovereign right“ of the state of Kosovo, according to the Turkey´s Embassy in Pristina, the capital of Kosovo. This transformation is being expected to happen within Kosovo´s constitutional framework, in coordination with NATO. Its main focus is to  apply principles of democracy regarding all ethnical communities in the country. Moreover, Turkey´s approach is that the transformation is seen as a tool to preserve stability and peace within the region which Turkey emphasizes as its main priority.

In august 2018 Turkish infantry troops from multinational battle group forces cunducted crowd-and-riot-control training near the town of Miresh in Kosovo in coordination with  the American forces from 3rd Battalion, 126th Aviation Regiment, Massachusetts Army National Guard using UH-60 Balck Hawk helicopters for an aerial insertion. The exercise was clearly aimed to demonstrate Turkish outright capability to respond up to 30 minutes in full alert to various crisis scenarios on the ground that might appear in Kosovo in future, according to the statements made by the commander of the Turkish infantry based in Kosovo,  captain Mehmet Onat.

Turkish infantry unit represents an inevitable part of Kosovo Force  (KFOR) mission that provides for contribution to maintain a safe environment in Kosovo.  In december 2018 the unit consisted from approx. 80 members. Apart from crowd and riot controls it covers the responsibility mainly for joint patrols with the Kosovo Border Police, Macedonia border patrols, Liaison Monitoring Team field house evacuations and securing observation post patrols. In addition, it is prepared and equipped to support Kosovo Police in the event of civil disturbances. Turkish soldiers that officially arise under Multi-National Battle Group – East (MNBG-E) are deployed in Kosovo and stationed with its headquarters at an official American base Camp Bondsteel located in Uroševac/Ferizaj that was established in 1999.  The armament of Turkish infantry in Kosovo claims to include heavy and light arms as rifles, sub-machine guns, machine guns and pistols. It is equipped by Mercedes-Benz Unimog trucks, Land Rover non-tactical vehicles and Cobra armored vehicles.
Since 1995, Turkey has participated in all operations that were conducted by NATO in the Balkan region. The most prominent appearence Turkey made in IFOR and SFOR in Bosnia and Herzegovina, Operation Essential Harvest, Amber Fox and Allied Harmony in Macedonia and of course KFOR in Kosovo.

However, Turkey and its military and security position in NATO is nowadays a very current issue internationally discussed. The reason for increased concerns are tensed relations of Turkey and USA. It is anticipated that in case of deteriorated situation regarding this issue, Turkey may change its attitudes towards NATO enlargement and change its stance to rather passive one or it will pass its involvement on Russia. First and foremost, it must be said that Turkey´s involvment in the region of Western Balkans does not depend on the regional situation but rather on its ties and relations with USA. It might seem evident that USA does not welcome Turkey´s cooperation with Russia on various levels. Firstly,  it is known that USA strongly objects Turkey´s proposal to buy Russian surface to air missiles system S-400. Moreover, Turkey intentionally plans to cooperate with Russia in Syria. Therefore, the Turkish proposal to buy S-400 must not be necessarily perceived as a sheer provocation towards USA but as a logical step, eventhough USA offered Turkey an alternative in a form of Patriot system. On the other hand, USA openly considers an option to apply sanctions on Turkey in case it accepts an offer from Russia. The sanctions are said to be represented by excluding Turkey from F-35 fighter jet programme. In this case Turkey provided statements that claimed the programme, without Turkish attendance, will be a failure as it produces nearly seven percent of the parts for the machines. On the other hand, USA representatives are denying any potential threat to the programme if Turkey steps off.

Nevertheless, the issue appears more complex and causes dilemma for NATO memebers in adopting a standpoint to the act and what is more, the conclusion will have a deciding impact on Turkey´s external relations including transatlantic norms in the Balkans and its alliances in the Middle East, namely in Syria. For now, Turkey is still promoting the integration of Western Balkans into transatlantic institutions, supports the enlargement of EU and NATO in the region.

DefenseWorld.net, 2019, F-35 Production Will Slow Down If Turkey Is Dropped From Program: Vice Admiral;https://www.defenseworld.net/news/24568/F_35_Production_Will_Slow_Down_If_Turkey_Is_Dropped_From_Program__Vice_Admiral#.XPUiuogzY2w

Aydıntaşbaş, A., 2019, From myth to reality: How to understand Turkey’s role in the Western Balkans;https://www.ecfr.eu/publications/summary/from_myth_to_reality_how_to_understand_turkeys_role_in_the_western_balkans