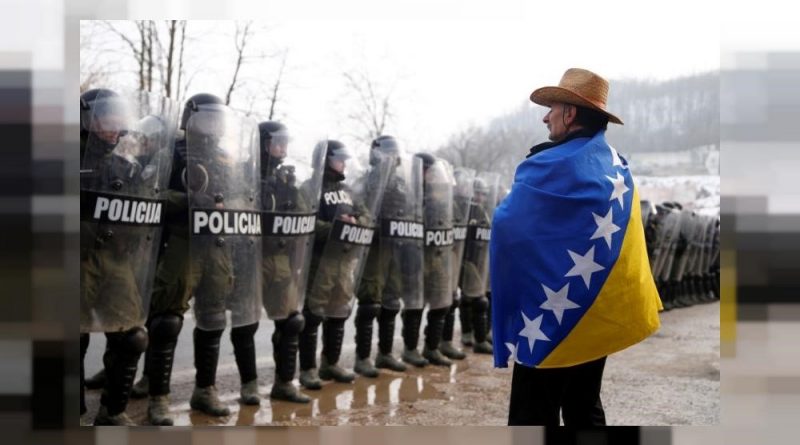 On 19th July 2019, the government of the Federation of Bosnia and Herzegovina implemented a new law concerning new social benefits for veterans who served in the 1992-1995 war and have been struggling over the years for higher grants (Lakic 2019). The veteran population should exactly gain 16 new rights, ‘’including the right to ‚existential compensation.’’’ (FENANAP 2019). Furthermore, this right can be availed either by veterans who have no money income, are older than 57 years and served during 1992-1995 war at least for 12 months, or by those with monthly income less than 80 EUR. However, in this case, the social benefit would be calculated according to the months in active service, wherein 1 month is rewarded by 2,5 EUR (Ibid.).

As mentioned above, the former combatants have been basically fighting for higher social benefits since the end of the bloody Bosnian conflict in 1995. Moreover, these similarities we can also find out in other parts of Western Balkans, especially in Croatia, Kosovo and Serbia, where the status of the veteran has been very often questioned (Rudic eds. 2018). Furthermore, after the Dayton Peace Agreement a massive demobilization began including approximately number of 300 000 soldiers from ARBiH (the Army of the Republic of Bosnia-Herzegovina – Armija Republike Bosne i Herzegovine), HVO (Croatian Defence Council – Hrvatsko vijeće obrane) and VRS (The army of Serb Republic – Vojska Republike Srpske) (Bougarel 2006: 4). What is more, according to Xavier Bougarel (2006: 1), Bosnian veterans are regarded as a part of so-called ‘’Boračka Populacija’’ (combatant population) which does not include only former soldiers but also entitles war disabled people as well as families of fallen soldiers. Additionally, during the war or shortly after, the former combatants started organizing themselves in veteran associations which were often closely linked to nationalistic political parties. The nature of these associations will be explored later on. Finally, we cannot also forget former child soldiers who have not been successfully incorporated into post-combatant society so far due to various reasons, therefore they will be noticed as well.

Last but not least, this text specifically deals with the war veterans and the aim of it is to portray the complexity of the issue to the reader. In addition to this, the first part of this paper will try to explore who the veterans (and former child soldiers) are. Lastly, the second part aims to describe the war veteran associations and raise some questions connected to it such as lobby, corruption and close ties to the political entities.

Who are the veterans?

Even though it has already been 24 years since signing the Dayton Agreement, yet the taste of war has not melted away over the years. The problematic of former combatants is a daily theme of Federation of Bosnia and Herzegovina (FBiH) and unitary entity Republika Srpska (RS), with no difference in other parts of Western Balkan. Besides, to better render the significance of this group in current society, we should rather look at some numbers. For example, on the one hand, Oliwia Berdak claims, according to the statistic of Sarajevo Peace Institute from 2012, that 80 % of men in Bosnia and Herzegovina (BiH) older than 37 years old might be theoretically veterans (Berdak 2015: 52). On the other hand, World Bank argues that if the post-war benefits are also linked to the family members then 1/3 of Bosnian population might be confronted with veteran’s matters (World Bank 2002: 35).

Furthermore, veterans have built a privileged position within the society (Berdak 2015: 49, 52). Given the regular incomparably higher social benefits than the rest of victims of war can apply to (World Bank 2012: 48−49) or because some part of society regarded them as heroes (Fischer 2006: 392). On one side, given their prominent role, some of them play a crucial role in high politics matters. On the other side, there are plenty of other veterans without having any work or dealing with posttraumatic stress disorder (PTSD) (Zdráhalová 2013). Moreover, as Bougarel fittingly says, ‘’the privileges enjoyed by the combatant population proved to be largely illusory’’ (Bougarel 2006: 6) as it could have been seen over the years. Finally, the veteran population has also frequently served as an instrument of nationalistic political parties since 1995, mainly during election campaigns. These political parties have tried to gain their support by, very often false, political promises with regards to higher social benefits. Some researches assume that veteran population constitutes the core of most political entities and therefore veterans have been named as ‘’voting machines’’ (glasačke mašine) (Hronešová 2016: 350). The answer why this is happening might be rooted in a poor economic situation where most of the post-combatants and their families rely on the social benefits and the starting point for their ethnonational political parties (ibid.).

Additionally, when talking about veteran’s social benefits, it could be assumed that it is important to briefly describe the system for better understanding. According to Kendra J. Gregson’s studies, more than 202 000 recipients of social war benefits can be traced  in BiH (Gregson 2000: 1) and these benefits feature roughly 2,5 % of total GDP (World Bank 2009: 9). Furthermore, the Bosnian state budget partially depends on the World Bank and IFM loans. Without these loans unpredictable and unstable financial environment would be created (Obradović 2016: 103). Moreover, ‘’spending on social protection schemes in BiH is high by international standards’’ (World Bank 2015: 6). In addition to this, the social war benefits are administrated by relevant ministries for veterans in capitals of both institutions, in Sarajevo and Banja Luka. Afterwards, these ministries relocate the money according to time spent in the army – only recognized armies are taken in consideration: VRS, ARBiH, HVO and JNA (Jugoslovenska narodna armija-Yugoslav National Army) (Popić a Panjeta 2010: 8)–, disability rate, age or family income. Nevertheless, it has been proven over the time, that this kind of relocation of social benefits consequently creates a blur system inclinable to corruption etc.; especially in case of fake veterans who do not fulfil all requirements and illegally use the funds. Some authors even claim that there might be around 300 thousand fake veterans (Spaic 2017). Drawing on these findings, yet there have been plenty of strikes organized by Bosnian veterans who were protesting for unified register of veterans which would solely include authorized veterans (Lakic 2018).

Notwithstanding, point often overlooked, a minimum people are taking in consideration former child soldiers who participated in the conflict by the same token, and be that as it may, there is an urgent need for the solution. As a matter of fact, the war had had a much bigger impact on these individuals than would have anybody thought. Many of these underaged fighters enlisted according to the propaganda accompanied by cloudy ideas about the nostalgy of former partisans. Likewise, many of them have a greater inclination towards PTSD coupled with unemployment as well as unfinished secondary education. Some surveys claim that there might be between 3000-4000 thousand of former underaged combatants albeit the exact numbers are unfortunately missing (Ahmetasevic 2014). Another key point is that based on the current legislation these individuals have not got the right to reach the social benefits given their unresolved status. In other words, the existing system solely includes veterans who were during the war older than 18 years old, the dean of Veteran Association of Underaged Soldiers (UB MDR-KS), Kemal Šalaka claims (Šalaka 2019).

As has been noted above, the problematic of former combatants has various implications and has not been resolved yet. However, for this paper, it is also crucial to mention veterans’ associations which have repeatedly played a significant role in the post-conflict transition and the political process as such. Their role will be further examined in the following lines.

First of all, already at the very beginning, first veterans’ associations such as JOB, BORS and HVIDRA had been closely linked and regarded as official partners to nationalistic political parties including SDA, HDZ, SDS and many others (Bougarel 2006: 5). Moreover, most of the associations are divided among the ethnic lines. For instance, association JOB was strongly influenced by SDP since its foundation in 1994 (Bougarel 2007: 186). Furthermore, the veteran’s associations receive regular generous donations where certain attempts of clientelism can be found. However, the first thing to be remembered is that their main purpose is mass mobilization, for example before the political campaign. Moreover, on the positive side, many of them help their members to find a job, accommodation, provide them with special consultations (Bougarel 2006: 5) and serve as a mediator between veterans and the government.

Given the fact, that some associations keep close ties with certain political parties, some researches frankly label them with a significant political lobby (Obradović 2016: 101−102). To put in another way, other social associations such as women NGOs etc. play just marginal role and receive just minimum funds comparatively to veterans’ ones. Additionally, veterans’ associations leaders have been frequently invited to specific ministries to consult veterans matters and, thus, consequently, have had a direct impact on law-making related to their purposes. As an illustration can be used the example from 2017 where the leaders of veterans´ associations signed agreement concerning releasing more money on veterans´ matters (Sarajevo Times 2017).

In terms of corruption, it is not just a question of political parties. In case of BORS, for example, the former dean Pantelija Ćurguz had been accused of fraud in the amount 100 000 KM which should have been used on veterans´ matters, in 2014 (Radio Slobodna Evropa 2014; RTVBN 2017). Given a similar cause, former dean of JOB, Saud Kulosman, was accused from corruption in 2013 but due to the lack of evidence the case was closed (Karabegović−Dizdar 2013).

Another key point is that some veterans’ associations show nationalistic tendencies which cause further inner tensions in an already divided society, in Bosnia. To give an example, when interviewing a Serbian leader from one of the veterans´ association in Bijeljina, I was told that their members recognize Serbia instead of BiH (the person wishes to be anonymous, the interview took part in February 2018). Additionally, in case of HVIDRA with its headquarters in Mostar, HVIDRA had been associated in the past with the extreme nationalistic inclinations (Europäische Stabilitätsinitiative 1999; Erözden, nedatováno: 12)

To sum up, on the one side, this attitude within high-level politics can be solely kept by dominant veterans associations such as BORS, JOB or HVIDRA. On the other side, there are plenty of others who have been struggling over the years for higher social support and are not able to begin any talks with political representation. In this matter, Hronešová argues that it might be due to the enormous number of these associations where only in Kanton Sarajevo can be traced 140 of veterans associations (Hronešová 2016: 351), and consequently it is not possible to give all of them the appropriate attention. In the entire BiH, there is registered around 1600 veterans´ associations (Spaic 2017). Another explanation might be that some of them have not got any intention to start a political dialogue because they consider the political elite as a corrupted unit.

All things considered; it seems reasonable to assume that veterans´ affairs in BiH are rather complicated. Recently, we could have seen that the political representation, at least in Federation, tries to deal with the current adverse conditions considering the social benefits. However, despite the recent alternation, it is not enough, according to many former combatants, not to mention any changes towards the child soldiers. Likewise, there have not been made any adjustments towards the unified veteran register so far.

In conclusion, the aim of this paper was to bring the veterans´ problematic closer, in some points rather unknown, to the reader. We could have seen the ongoing struggle for higher social benefits which has been going on for than two decades. Notably, it was shown who the veterans associations are and on various occasions, they can serve well to certain political parties. Given the certain complexity, it could be concluded it is highly necessary to follow and deepen the current research in this area.

A former army member wrapped in a  flag of Bosnia and Herzegovina stands in front of members of SPJ ZDK (Special Police Forces) during an attempt to block the main road at a protest in Doboj, Bosnia and Herzegovina March 3, 2018 ‘‘ (Source: Euronews, Bosnia police, protesting war veterans in standoff after clash 03.03.2018).