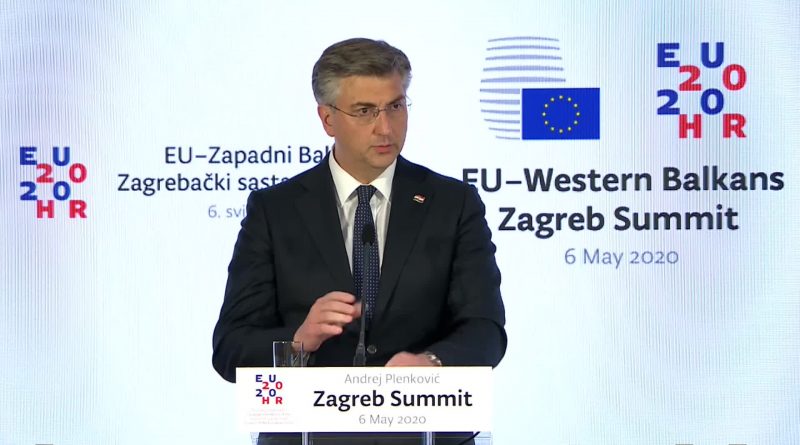 On May 6, while the world is fighting the pandemic, it was held an important EU Summit on the Western Balkans. The meeting was organised in advance but it has assumed new importance under the emergency circumstances. The date has a historic value since it came twenty years after the Zagreb meeting 2000 when it was officially declared the “European Perspective” for the Western Balkans.[1]

The agenda was set on 17 February in Bruxelles with the main expected topic on the step made so far by the Western Balkans countries in the field of rule of law, in the fight against corruption and organised crimes. The agenda was completely modified and gained new importance due to the pandemic situation, becoming the opportunity to talk about a joint response to the health and economic sector.[2]

The meeting was held at the end of the first Croatian Presidency of the Council of the European Union, a presidency that due to the vicinity and understanding of the overall area has grown big expectancies in reaching a more sensible step towards the engagement of the European Union in the area. The conference was the first official meeting after the appointment of the Eu envoy for the Belgrade-Pristina dialogue.

The participants‘ countries had a different attitude towards the meeting and there were differences in how to analyse at it and its results. Indeed, for Albanian and the Republic of North Macedonia, it was an important step after having received the green light to open negotiations for further enlargement of the European Union. The European path for these countries is going be long but it represents the coronation of the efforts made in these years and the commitment to follow the path established by the 2003 Thessaloniki Declaration. On the other hand, Kosovo desired to receive a confirmation on its desire to received the green light for the waited visa liberalisation. The European Union desired to recover the lost ground with other competitors in the region, Russia, and China, which have used the pandemic to strengthen their interests in the area with an aggressive aid policy. The pictures of the Serbian President Alexander Vucic waiting at the Belgrade Airport[3] for the medical equipment sent by China was a wake-up call for the efforts made by the European Union in helping its southern side to fight the effects of the pandemic. The European Union planned, before the summit, of investing €38 million to cover the immediate healthcare needs. Overall the biggest help will go to Serbia, the worst affected country of the region with a tranche of €15 million.[4]

The EU summit took the chance to reaffirm once again the importance of the EU in the region as one of the main players also in supporting the recovery trying to improve its imagine waiting for the future challenges of the post endemic situation.

The declaration approved by all participants could be summoned into three main topics: the investment and recovery funds foreseen for fighting Corona Virus, reaffirm the commitment in strengthening democracy and rule of law in the region, the importance of establishing good neighbourly relations for further development.

The European Union mobilises a package of over €3,3 billion in support of the health sector and the social and economic recovery. Moreover, there will be another € 750 million in Macro-Financial Assistance and together with the European Investment Bank another € 1,7 billion in assistance to the recovery programs for the Western Balkans.[5] Overall, in responding to the previous campaign made by Russia,[6] China, and Turkey[7] the declaration underlined the importance of the support provided from the European Union as the biggest support plan until now provided by any partner.[8] The unanimous declaration in thanking European union for the aid seems particularly direct as an answer to the variable public declaration made by the Serbian President Vučić during the emergency.[9]

The participants stressed the importance of the further development of the area in structural reforms especially in rule of law, fight against corruption, respect of human rights, gender equality, and right of the minorities. The call has particular importance due to the later development in the area and for the fear of wrong use of the emergency powers to limit essential citizens‘ rights as the rights of manifestation and the freedom of expression. An alarm on the particular vulnerability of the area sounded after the release on the same days of the summit of the Freedom House report, an international non-governmental organization that every year published a report for each country on the democratic indicators. The reports labelled Serbia and Montenegro as not any more democracy, with a more authoritarian regime, but highlights the improvement made by Kosovo and North Macedonia made so far.[10] The European Union wants then once again to stress the importance of strong democratic countries as a prerequisite for any further discussion of the candidacy for being a member state. In this optics, it needs to be read point 8 of the final declaration in stressing the weakness of the Western Balkans countries in fighting disinformation and cyber attacks, where the regional collaboration is the necessary key in fighting this threat.

The importance of establishing a solid regional collaboration is the last strongpoint of the final declaration. The signed Prespa Agreement between Greece and North Macedonia and the treaty of Good Neighbourly Relations between Bulgaria are the main example for building cross border relations and in setting historic discrepancies between different countries. The summit suggested improving the cross border cooperation referring to the further opening Belgrade-Pristina dialogue which, in the intention of the European Union, with the appointment of Mr Lajčák might reopen soon again. Interesting was the renewed diplomatic efforts made by Spain in participating in the meeting since it is the strongest not recognising country of the Kosovo status, and which has always requested to avoid its participation together with the Kosovo delegation. The policy line for Spain is a recognition and participation in these events of Kosovo only after establishing a good diplomatic relationship with Serbia.[11]The the diplomatic effort of Spain could represent at this stage an element of resistance on the European side when is much needed a common policy line to support the attempt of Mr Lajčák to reopen the dialogue between Belgrade and Pristina.

The summit once again reaffirmed the European path already set in Thessaloniki without giving any practical perspective on the overall region, even if the example of Albania and North Macedonia could give new imputes to the other countries. Still, mainly for Serbia, Kosovo, and Bosnia and Hercegovina is much needed in the future a more direct approach with more reinsurance from the European side of their interests in the region.

In conclusion, much of the February agenda for the meeting was disregard creating many hopes for a next summit that could be organised during the German presidency. It is necessary to underline that future meetings might have more difficulties in answering the enlargement perspectives of the region due also to the necessity for Germany and the other European members to strengthen the Union in its fight against the socio and economic consequences of the Corona-Virus.

Written by Francesco Chiavon
About the Author: Francesco Chiavon graduated from the University of Trento (Italy), Master Degree in European and Transnational Law with a Master Thesis in International Humanitarian Law on the protection on medical personnel in armed conflicts. Francesco has previously worked as Junior Project Officer at the UNDP office in Kosovo in a project whose aim was strengthening the local institutions in the fight against corruption. He has also a legal experience working in both criminal and civil law. Francesco also collaborates with Professor Jelen Igor of the University of  Trieste (Italy). He wrote and soon be published articles on the political and constitutional situation of Central Asia Countries with an insight on the human rights perspective and presented papers on the Legal Status of the Caspian Sea.
Sources:

[6] for further readings on the help provided by Russia especially towards Serbia: https://jamestown.org/program/moscow-using-pandemic-to-shore-up-alliance-with-serbia-against-nato-and-china/ accused at 15.05.2020.

[9] The President on April 23 declared its happiness not to be in the list of the countries receiving aid from European Union ( https://emerging-europe.com/news/serbias-president-proud-of-countrys-absence-from-eu-financial-assistance-package/, accessed at 13.05.2020). But on April 24, he thanked European Union for its help and reassured the European path of Serbia (http://rs.n1info.com/English/NEWS/a592538/Vucic-thanks-EU-for-significant-aid.html, accede 13.05.2020).