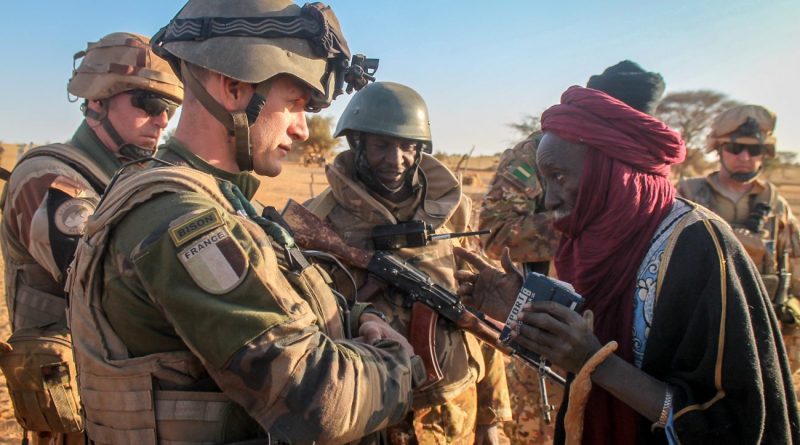 The 3d of June, almost a month after the death of a French soldier in the Sahel, the Operation Barkhane neutralized the leader of the group Al-Qaeda in the Islamic Maghreb. In light of those events and seven years after the dispatching of the first French operation, it is relevant to observe France’s role in the region.

What is the Sahel region and what is happening there?

The Sahel is a strip of land crossing the different African States from West to East. States as Mauritania, Mali, Burkina Faso, Niger and Chad became independent from the French colonial empire in 1960. They also have the particularity of being the territory of local and regional conflicts and trafficking. The lack of national sentiment supports the settling of external and local leadership, sometimes owned by terrorist groups. Since the years 2010’s, terrorist and extremes armed groups have spread in the Sahel region. Three main groups can be relevantly named here. The Islamic State in Greater the Sahara (IS-GS) has for goal to settle an Islamic caliphate in the centre of Africa. The Support Group for Islam and Muslims (JNIM) claims its links with Al-Qaeda. Lastly, Ansarul Islam is the principal force in the Sahel and benefits from the support of the population. The growth of violent extremism contributed, along with the transnational organised crime and local conflicts, to the rise of insecurity in the region (Assanvo-Dakono eds. 2019). This latter led France to take steps for the sake of international security, and ultimately its own.

How did France get involved?

As underlined by Alexandra Reza in her article for the Guardian, „French troops have been in the region on and off since they occupied it in the 19th century, seeking to secure France access to labour and resources. They have remained, and returned, since independence“(Reza 2020).  But what triggered the return of French troops in Western Africa?

On January 11 2013, the former French President François Hollande responded to the Malian request for help by launching the Operation Serval. Its mandate was to stop the offensive looming on Bamako, take back control of Timbuktu and put an end to the rooting of terrorism in Mali. Afterwards, the goal was to transfer the stabilisation of the country to a Malian army strengthened and to the blue helmets of the MINUSMA (Backmann 2020).

On August 1 2014, Operation Barkhane replaced Operation Serval. According to the French executive, this new operation seeks mainly to reinforce the transfer to the G5 Sahel countries the fight against terrorism in the name of the „collective security“ (Reza 2020). The main focus reversed: the mission of training the national army is the first goal. Less than a year after the renewal of the intervention in the Sahel region, France faced two terrorist attacks. The first was led against the newspaper Charlie Hebdo. The second was simultaneous attacks spread in the French capital Paris. Those strikes, that deeply troubled the population, were not claimed by groups present in the Sahel. However, the fight against terrorism was more relevant than ever and fuelled operations.

As underlined by the government, the role of France is to support „the Sahel States in their efforts to address their challenges“ in terms of security. France hence places itself as a supporting force to the existent but poor system in place amongst the countries of the region but also restores its position of „policeman of the world“ by fighting terrorism and trafficking. This intervention also stays in line with its external policy in Western Africa of the „3D“ approach, combining defence, diplomacy and development.

Following the Pau conference held in February this year, the French President Emmanuel Macron declared the dispatch of 600 soldiers to back up the already 45 000 present in the Sahel region. They, as well, benefit from technical military devices, such as fighter jets, drones, armoured vehicles and helicopters, are present in the region.

Nevertheless, the French military is allegedly not facing the terrorist threat by itself. Indeed, the Barkhane Operation is a partnership between France and the armies of Mauritania, Mali, Niger, Chad and Burkina Faso. France also advocated towards other European countries and can count as allies on the field Belgium, Norway, the Netherlands and more recently Estonia and the Czech Republic. The United Kingdom and the United-States of American recently renewed their support to the operation, in spite of the difficult current context. The United Nations are also present through the Multidimensional Integrated Stabilization Mission in Mali (MINUSMA). Finally, the European Union implemented, as well, training missions in both Mali and Niger.

Despite this great multinational troops dispatch, the reality on the field is different. According to French high-ranked soldiers, they must accomplish by themselves the entire mission. The main reasons behind this situation are the poor equipment and training West African security forces have to deal with. Those factors also affect the blue helmets contingent, which lost 200 soldiers since the beginning of the mission in 2013 (Backmann 2020).

The failures and stakes of the Operation

This fracture on the field reveals the failures of the Operation. The French military holds the heavy burden of both training the West African armies and seeking out terrorist groups. This extremist and terrorist threat has continuously spread and reformed since 2013. For seven years, the French army has been chasing a force that keeps growing and feeding on the traumas of Western African countries.

Besides, cracks also appear on the political level. Indeed, last year, one specific group was attacked by the French military, overriding the mandate of the Operation Barkhane. Between the 3d and the 6th February, the French military bombed a rebellious group known as the Union of Resistance Forces. This Chadian armed group was leaving its Libyan base and was suspected of seeking to overthrow Idriss Déby, the Chadian President. The irony in this attempt is that almost thirty years before, Idriss Déby himself completed the same manoeuvre. With France’s help, he was back then successful (Debos 2019). This event marked the runoff of Operation Barkhane and revealed its political cracks. By giving this order, France openly assumed the use of force in a domestic affair (Carayol 2019) As Alexandra Reza stated, „seen this way, the presence of French soldiers in the Sahel has more to do with securing French interests than about achieving security for the general public“ (Reza 2020).

To this political stake adds up the economical one for taking action in the Sahel region. As previously mentioned, France is a former colonial empire. Its ties with African lands are still very vivid, as well as its economical interests. As Alexandra Reza would qualify it, „France still has significant commercial and political interests in the region“(Reza 2020). For instance, until very recently, some countries such as Mali or Burkina Faso still had for currency the CFA franc inherited from the parting colonial empire. Moreover, major French industries exploit resources in the Sahel region. In Niger, Orano exploits uranium; in Mali, Total owns oil fields. The commercial pressure from this market implies the importance for France to keep some roots in the Sahel. In conclusion, numerous capital aspects are inherent to the French implication in the Sahel region.

Yet, the failures and excesses caused by the presence of France in the region have pulled triggers among the population. Protests against the French presence in certain countries such as Chad have risen, despite the wish of Western African leaders. Indeed, after the inquisition of President Macron in the Pau Summit in February, the presidents of Burkina Faso, Niger, Mali, Mauritania and Chad renewed their call for French assistance in the Sahel region. And as commented by Alexandra Reza, „In making French military presence apparently conditional on a public show of allegiance, Macron wants to be seen as committed to the democratic process in Africa“, hence avoiding the old staining image of colonialist decision-maker (Reza 2020). However, outside the conference centre, protesters were standing. They were representing the growing feeling of the Western African population that wants to free its nation from the French yoke. They want to get rid of the French colonialist past and the „Françafrique“ label still very present in political and economical decisions.

After seven years, and despite some small “victories”, the Operation Barkhane led by France reaches a stalemate. It appears then that the „negative spiral“ of the „total security“ ideology showed its limits in the Sahel region and that the presence of France for so long as not been able to reverse the current trend (Carayol 2019). Moreover, it is clear today that the interests at stake in the region are not solely related to security and raises public scrutiny among the Western African population.

Finally, France’s situation can be assimilated to the Unites-States of America’s intervention in Afghanistan or Iraq. Despite learning the lessons of those never-ending foreign interventions, France got caught up in its very own quagmire.

Reza A. (2020). Why are French soldiers in Sahel? Protestors have an answer, 20.02.2020, The Guardian (https://www.theguardian.com/commentisfree/2020/feb/20/france-soldiers-sahel-emmanuel-macron-protest).